Since 2010, the total share of wind generation in the US has more than doubled with many states seeing renewable energy as a way to offset the closing of coal and nuclear plants.

At the national level, wind’s share of total U.S. electricity generation has risen every year since 2001. Wind facilities produced 190,927 gigawatthours (GWh) of electricity in 2015, accounting for 4.7% of net U.S. electric power generation. This level represents a doubling of wind’s generation share since 2010, when the share was 2.3%. Based on monthly data through July, wind has provided 5.6% of U.S. generation in 2016. 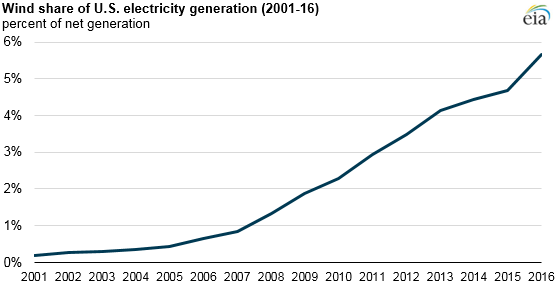 States with the highest wind generation shares are located in the Central High Plains and the Rocky Mountains, regions that have high wind resources. The increase of wind power in the United States has been driven by a combination of technology and policy changes. Technological changes include improved wind technology and increased access to transmission capacity. Policies such as the Federal Production Tax Credit (PTC), Investment Tax Credit (ITC), and state-level renewable portfolio standards (RPS) have led states to build more wind capacity. The PTC grants a federal tax credit on wind generation, while the ITC allows federal tax credits on wind farm investments. State RPS, meanwhile, require that a minimum percentage of electricity generation comes from renewable energy.

Twenty-nine states and the District of Columbia have RPS policies, and an additional eight states have renewable portfolio goals. Besides RPS, many states provided incentives—such as mandated purchases and an exemption from property tax—to encourage wind power in their states. More information on state policies that have affected the adoption of wind power is provided in EIA’s Electricity Monthly Update.