EIA’s Weekly Natural Gas Storage Report (WNGSR) publishes weekly natural gas storage inventories by region. Natural gas storage levels have been high and recently reached a record 3,978 trillion cubic feet as of Friday, November 6. In an effort to better illustrate regional storage trends, EIA will publish weekly data divided into five regions, rather than the current three, beginning with the November 19 report. Later today, the WNGSR page will reflect the new five-region format, and the three-region series will be discontinued.

When the WNGSR was originally established in 1993 by the American Gas Association, data for the Lower 48 states were separated into three groups: the Consuming East, the Consuming West, and the Producing region. At the time, the Producing region (including Gulf of Mexico offshore) was home to 74% of the nation’s natural gas production, while the other regions were generally consumers. Because of changes in regional trends in natural gas consumption, production, and storage since then, the new categorization generally splits each of the previous two consuming regions into two parts, while the coverage of the former Producing region is now largely encompassed by the South Central region.

With a few exceptions, the states previously grouped as the Consuming East region are now in two groups: the Midwest and the East. The main difference in the two regions is the type of storage facilities. The Midwest region with its high concentration of aquifers has more than 85% of all natural gas storage aquifers in the nation. This type of field tends to have only one cycle per year—they are filled with natural gas during summer and fall, and then the stored natural gas is withdrawn through winter and spring. Facilities in the Midwest tend to inject natural gas at much more consistent volumes compared to the East, reflecting the more stable and predictable behavior of aquifers.

Storage facilities in the East region, by contrast, consist almost entirely of depleted fields. Depleted fields generally offer a higher degree of flexibility to inject or withdraw gas at any given time compared to aquifers, and as a result, net movements of gas into and out of storage in the East region show more variability than those in the Midwest. 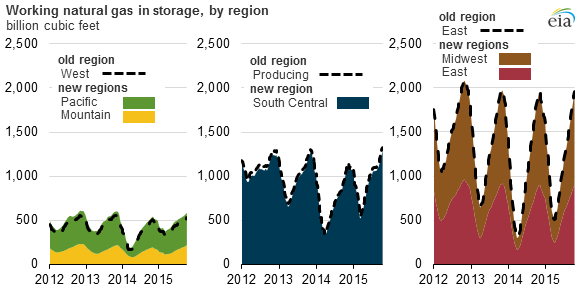 The previous West region was split into two regions, the Pacific and Mountain regions. Although both the new Pacific and Mountain regions are dominated by storage in depleted fields, the Pacific region facilities tend to have much higher deliverability—meaning gas is able to be withdrawn at higher rates. Average deliverability of fields in the Pacific is close to 0.5 billion cubic feet per day (Bcf/d), which is nearly three times higher than that of the Mountain region, even though average working gas capacity is roughly the same in the two regions. Many facilities in the Pacific region use storage in an active way to respond to price conditions and customer demand, similar to how salt facilities might operate.

With the exception of New Mexico, which is now in the Mountain region, the Producing region has remained relatively unchanged, but it was renamed the South Central region. The South Central region is home to most of the U.S. salt dome storage facilities, which are able to cycle gas much more rapidly than either depleted fields or aquifer storage. Because the nature and operation of salt facilities are distinct from depleted reservoir facilities, the South Central region can be further separated into salt and nonsalt, as was the previous Producing region. EIA began publishing separate salt and nonsalt data in 2012, and backcast the series to the end of 2006. 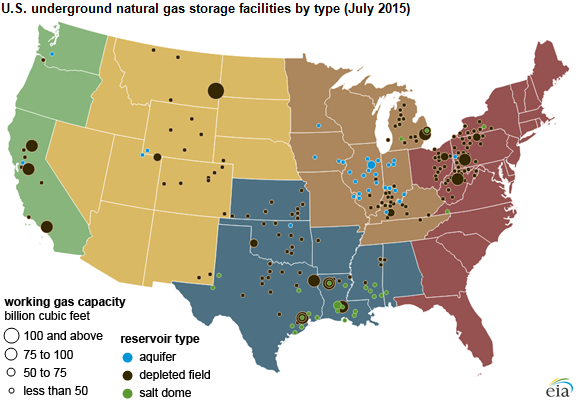 More detailed information on the new storage regions is available on the WNGSR’s FAQ page.

Read the rest at EIA.com