Continuing with the trend of rising reliance on natural gas for electricity generation, the US is expected to add over 11GW of natural gas generating capacity in the next two years.

The electricity industry is planning to increase natural gas-fired generating capacity by 11.2 gigawatts (GW) in 2017 and 25.4 GW in 2018, based on information reported to EIA. If these plants come online as planned, annual net additions in natural gas capacity would be at their highest levels since 2005. On a combined basis, these 2017–18 additions would increase natural gas capacity by 8% from the capacity existing at the end of 2016. Depending on the timing and utilization of these plants, the new additions could help natural gas maintain its status as the primary energy source for power generation, even if natural gas prices rise moderately.

The electricity industry has been retiring some coal-fired generators and converting others to run on natural gas in response to the implementation of environmental regulations and to the sustained low cost of natural gas. The cost of natural gas delivered to power generators fell from an average price of $5.00 per million Btu (MMBtu) in 2014 to $3.23/MMBtu in 2015 and averaged $2.78/MMBtu from January through October 2016, the latest available data.

Expanded production from shale formations is one of the main reasons that natural gas prices have remained low in recent years. Many of the natural gas-fired power plants currently under construction are located in Mid-Atlantic states and Texas, where the nation’s major natural gas shale plays are located. Expanding natural gas pipeline networks also help support the growth in natural gas-fired electric generating capacity.

Based on projections in EIA’s January 2017 Short-Term Energy Outlook (STEO), natural gas prices are expected to increase in both 2017 and 2018. Rising natural gas prices could lead developers to postpone or cancel some of the upcoming power plant additions. Construction timelines for these plants are relatively short: more than half of the natural gas-fired generating capacity scheduled to come online in 2017 and 2018 was not yet under construction as of October 2016. 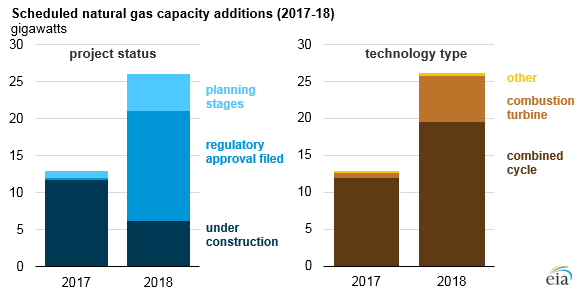 Rising natural gas prices could also encourage power generators to lower their use of natural gas-fired capacity. Despite the additions to capacity in 2017, the STEO forecast share of total U.S. generation supplied by natural gas falls from 34% in 2016 to 32% in 2017. In contrast, coal’s share of generation is projected to rise from 30% to 32%.

By 2018, however, the scheduled expansion of overall capacity fueled by natural gas is expected to more than offset the effect of higher natural gas prices and potentially reduced utilization, resulting in a slight increase in natural gas’s share of total U.S. electricity generation. 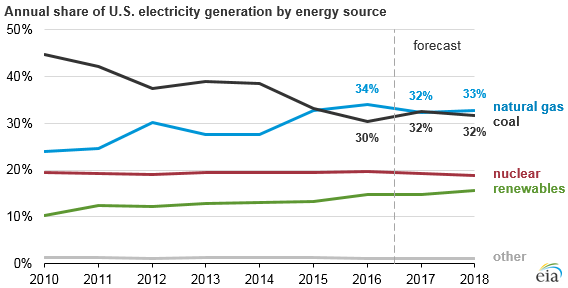