Hurricane Joaquin may cause problems for East Coast energy infrastructure 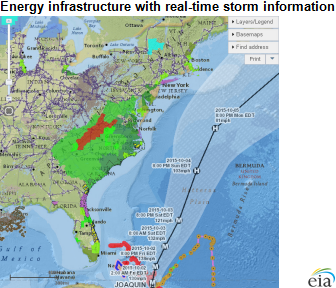 Hurricane Joaquin, which strengthened to a Category 4 storm on Thursday, is on track to move north along the East Coast this weekend, potentially bringing torrential rainfall and flooding to the region. To help analysts assess potential storm effects, EIA maintains an energy disruptions map that displays energy infrastructure and real-time storm information.

Because of the storm’s proximity to the coast, high winds, rainfall, and flooding will potentially affect energy infrastructure such as power transmission and distribution lines, petroleum refineries, natural gas processing plants, and distribution terminals. Portions of 11 states along the East Coast have already experienced heavy rainfall and, in some cases, flooding prior to Hurricane Joaquin, all from an on-land storm system moving through the region. Hurricane Joaquin could amplify these effects, even if the storm does not make landfall. Governors in Virginia, Maryland, New Jersey, South Carolina, and North Carolina have declared states of emergency ahead of the storm’s arrival.

Hurricane Sandy, the last major storm to affect this region, had major impacts on energy infrastructure in October 2012. Downed power lines and flooded electric substations contributed to more than eight million customers losing power. Fuel distribution networks and petroleum terminals and petroleum product terminals were damaged, and the lack of power caused many service stations to be unable to pump gasoline.

Users can continue to track the storm and nearby energy infrastructure on EIA’s energy disruptions map, and keep updated on any storm-related outages with the U.S. Department of Energy’s Energy Assurance Daily.