According to EIA, the average commercial customer received over $600 for participating, while industrial customers received over $9,000 just for reducing their energy usage during times of peak demand.  If your firm has the ability to reduce load during times of peak demand, such as mid-afternoon on weekdays, enrolling in a DR program can greatly benefit your bottom line.  See the story below for more details: 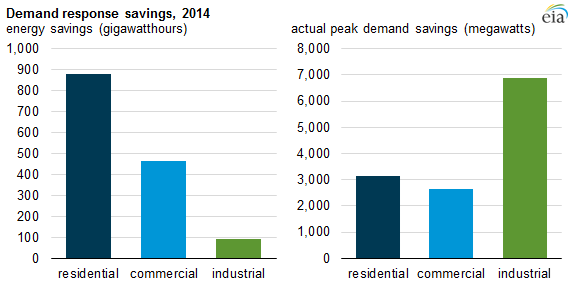 Demand response is one element of demand-side management, which includes increased adoption of energy efficient equipment at residential, commercial, and industrial customer locations. Some programs allow electric power system operators to directly reduce customers’ load by temporarily turning off cooling equipment or industrial processes, for instance. In other programs, customers retain control and can choose to participate in announced demand-response events. Equipment such as advanced metering systems and appliances that can be remotely cycled by grid operators (for example, air conditioners and water heaters) is a component of demand-response programs.

Based on data collected in EIA’s annual survey of electric power sales, revenue, and energy efficiency (Form EIA-861), about 9.3 million customers in the United States participated in demand response programs in 2014. Most of these customers (93%) were in the residential sector, with the average residential customer saving about 100 kilowatthours annually and in turn receiving about $40.

Read the rest at EIA.com