The U.K. natural gas markets went into winter with significant risks due to the lack of long term storage increasing the need to supplement with potentially volatile LNG imports. Electricity markets were further at risk due to increased intermittent renewable generation. Seasonal baseload electricity and NBP prices pushed up ~50% between April and September 2018 due to those risks. Since then, a very mild winter made for a bearish global energy market environment, which allowed numerous LNG cargoes arriving at the Dragon, Milford Haven, and South Hook LNG import terminals, and dropped forward prices ~30% as fears of shortages eased.

Further highlighting the mild winter in the U.K. is National Grid’s announcement on 28 March, confirming the 2018/2019 winter peak demand periods, also known as the Triads. Triads are the three periods of peak system demand between the beginning of November and end of February. However, due to the mild end to last winter,
they were measured on 22 November from 17:00 to 17:30 (45.3GW), 10 December from 17:00-17:30 (45GW), and 23 January from 17:30-18:00 (46.9GW) highlighting the weak demand through the normally cold February. These three peak demand periods determine transmission demand charges for businesses and can be reduced using load reduction measures or onsite generation. 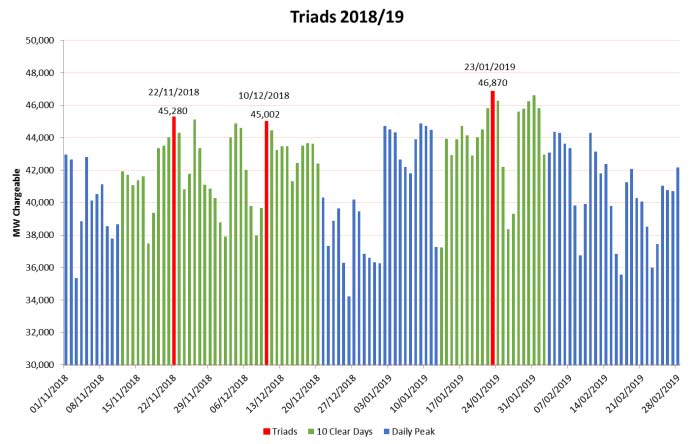 The Triads have continued their downward trend, reaching the lowest levels of nearly 25 years. The drop in the 2018/2019 winter can be attributed to reduced seasonal demands (mild winter) while demand reduction and energy efficiency measures improvements have helped reduce peak demands over the years.