Since late 2016, regulators in Connecticut (CT-PURA) have been researching the growing market for renewable or “green” energy products. As a result of that process, conducted under Docket 16-12-29, decisions were made regarding what qualifies as green energy and how the marketing of green energy needed to change.

What did the regulators find?

Regulators found that most green energy products being sold by energy suppliers were based on nationally sourced Renewable Energy Certificates (RECs) and not directly tied to energy generated within the state of Connecticut.  Further, they determined that consumers did not properly understand the concept of RECs and assumed they were buying locally generated green energy when, in fact, the REC might be generated many hundreds of miles away.

Regulators feared that those RECs were not providing true environmental benefit to Connecticut through reduced local emissions or improved air quality.  They also found that the marketing of such products decreased the potential spend on more locally beneficial products.

Beginning January 1, 2021, the marketing of current REC-based products as green energy must be discontinued.

In addition to the above, in order to be marketed as Green Energy a Voluntary Renewable Offering (VRO) must disclose the actual generator from which the REC is sourced PRIOR to the execution of the contract. This is sometimes referred to as an “asset-specific” contract in current terms.

Newly expanded disclosure labels for each product are required, as well as independent third-party verification of certain aspects of the program.  There are also significant prescriptive contract sections, terms, and clauses that will be required for both products.

How will this impact the voluntary renewable market?

The new restrictions on what RECs can be offered within Connecticut from a geographic perspective exclude many of the largest wind resource markets, including key areas of Texas, Iowa, Oklahoma, and Kansas.  In fact, it excludes virtually all of the top 10 states[2] for wind generation in the US. 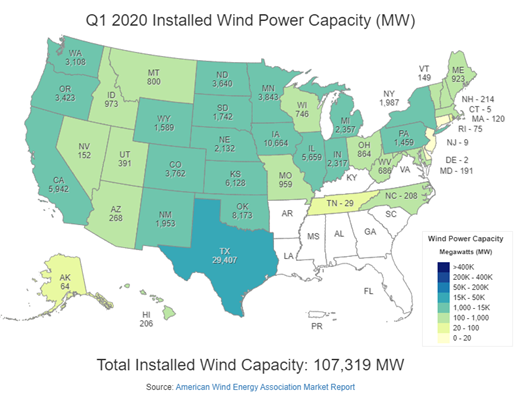 Will it cost more to go green?

Increased reporting requirements and contract restrictions are hard to quantify, but the decreased flexibility of sourcing alone is likely to increase the cost of going green in Connecticut from the current ~$0.0015/kWh by as much as tenfold.

Tradition Energy is the nation’s largest and most experienced independent energy risk management and procurement advisor, serving more than 1,300 commercial, industrial, and governmental clients ranging from Fortune 500 global companies to medium-sized businesses to local municipalities. Tradition Energy is part of the Tradition Group, a leading global institutional broker of financial and commodity products. Tradition employs over 2,300 people in 29 countries around the world and is publicly listed on the Swiss stock exchange (CFT). www.TraditionEnergy.com

“The larger than anticipated draw on inventories of both crude and refined products gave us some support and will help keep WTI above $70, despite concerns over renewed COVID-19 economic impacts and lagging global demands,”
Market Watch,
“There are serious concerns about whether or not the global economies will hit a hiccup as a result of additional Covid variants,”
RIGZONE,
“Natural gas has found strength not only from below-normal levels of storage, but also pipeline issues that limited production recently,”
Barron's,
See all News